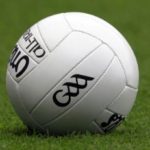 The senior footballers picked up their first points of the league campaign with a nail biting win over Ardoyne at Boucher Road last Wednesday. On a bright evening with an 8.15 throw in, the game finished in almost darkness but on the bright side we took the spoils with a solitary point dividing the teams.

Both teams exchanged a brace of early points with Ryan Park and Anthony Rowntree getting on the scoreboard. Â We were defensively solid and Ardoyne found it difficult to create scoring opportunities and we opened up a four point margin with points from Daniel Largey, David Nugent, Gerard Burns and Padraig McParland. Half time Davitts 0-6 Ardoyne 0-2.

We were on the front foot at the start of the second half with further points from Daniel Largey and Padraig McParland (free) to stretch our lead. Ardoyne hit back with two points before Gerard Burns got his second point of the game. Ardoyne then enjoyed their best spell of the game Â with a goal and a point to leave a point between the teams. They had further goal opportunities but several outstanding saves from Damian Nugent kept us in front. From here on it was anyone’s game, Daniel Largey pushed the lead to two, Ardoyne reduced the lead to a point, Caoimhin Slane got his first point to restore the two point lead and again Ardoyne reduced the deficit to one. Daniel Largey then scored an excellent point from a tight angle and with two points in front and the game moving into injury time it looked as if we had done enough and the game was won, however a pointed Ardoyne free left one in it and a nail biting few seconds ensued before the referee signalled the end of the game.

This entry was posted in Senior Football. Bookmark the permalink.
This site uses cookies More info