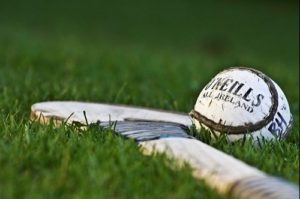 The Senior hurlers suffered another league defeat, this time at the hands of Derry visitors Na Magha, who ran out winners by 13 points in glorious sunshine at Woodlands 4G pitch.

In the first half, the game moved from one end to the other as the teams traded points in the early exchanges, with Anthony Rowntree, Chris Gallagher and Sean McIlhatton all scoring from open play and helping us to a 0-3 to 0-2 lead.

Soon after this, an unfortunate fumble from Shiner Mooney saw the green flagged raised for the visitors, who were very accurate from both placed ball and open play throughout the first half. But we rallied, worked hard to level the game through great scores from Conor Matthews and Canice Mooney and even took the lead again with a ’65 from Chris Gallagher.

Na Magha replied very quickly to level and gained the upper hand for the rest of the half, outscoring us 0-8 to 0-3 with our scores coming from a Chris Gallagher free and two well taken points from the stick of Stephen McGivern

The second half did not reach the same intensity or pace of the first, possibly due to the sweltering heat but also as Na Magha seemed to lift their game a little. Points were exchanged, Chris Gallagher getting his fourth point before the visitors scored a free and then hit a second goal leaving them nine ahead.

A lot of play was in and around the middle of the pitch after this and although the visitors were reduced to 14 men, we could not eat into the lead, squandering at least half a dozen chances to register scores. Na Magha pushed on and a pointed free was followed by a third major, stretching their lead and leaving the result in no doubt.

The match petered out after this, with no real scoring opportunities for either side before referee Hugh Torney blew for full time, with the final score Davitts 0-10 Na Magha 3-14.