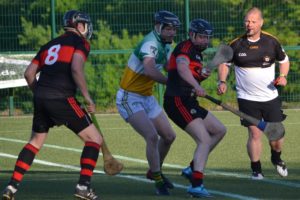 Naomh Colum Cille proved too strong for us on a fine evening on the 4G surface at Woodlands. They were off the mark early and built up a commanding lead as they were very efficient with their point taking, racing into a 7 point advantage. We registered our first score when Michael Rowntree took possession of the sliotar from a puck out, hand-passed to Sean McElhatton who struck it between the posts. We followed up with a Thomas Maguire cross field ball to Chris Gallagher, he fed Stephen McGivern who side stepped his man and took his point. Chris Gallagher then pointed a 65 and we had reduced the gap to 4. However a brace of points from the Tyrone side widened their lead. Both teams then exchanged points with Stephen McGivern again on the mark, but a point and a goal for Naomh Colum Cille put them well in the driving seat. We finished the half strongly with another Stephen McGivern point, Chris Gallagher knocked over another 65 before flighting a high ball into the square which deceived the keeper and ended up in the net to leave 4 points between the teams at the break. 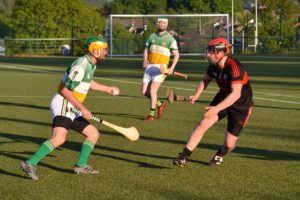 The second half belonged to Naomh Colum Cille, as they pushed home their advantage; 1-7 without reply put the game to bed. We fought hard and the highlights were 2 points from Canice Mooney, one from his own half and the second after good work involving Jay Close and Stephen McGivern. The game petered out with Brian Creen getting our final score before the Tyrone side finished with 2 of their own to win 2-19 to 1-9.Â  A deserved win for a good side who will no doubt be in the battle for promotion.