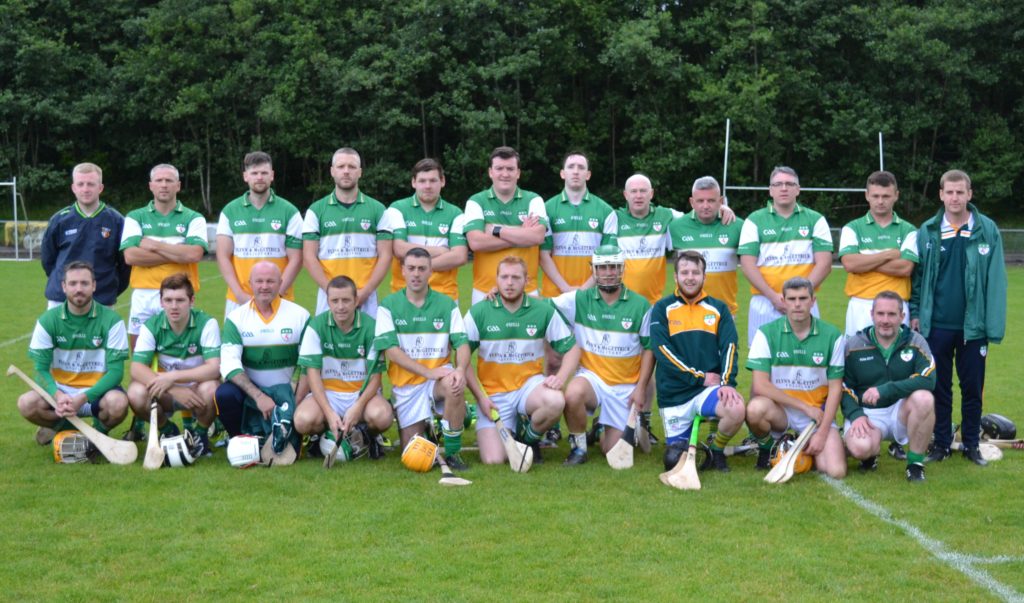 The senior hurlers collected the junior B hurling championship title for the third year in a row when defeating Ballymena in a keenly contested final at Hightown yesterday.

Playing against the breeze in the first half, early points from Rory McEvoy followed by a Stephen McGivern pointed free got us off to the ideal start but Ballymena struck back to level the game. Colm McKee then split the posts to restore our lead, but another brace of Ballymena points put them in front before a Stephen McGivern pointed free levelled the match again. Ballymena then roared into a six point advantage as they struck two goals in a short space of time. Â The half ended with two Canice Mooney points and a Ballymena pointed response to leave us trailing 0-6 to 2-5 at the break.

We got off to the perfect start in the second half when Stephen McGivern, after his initial effort was saved, pulled on the sliotar and it hit the back of the net, 2 between the sides. Canice Mooney then pointed two frees and in the blink of an eye we were back in the game with the scores tied. Ballymena replied with a long range pointed free. A great clearance from Gary Nelson was picked up on the left wing by Rory McEvoy, he went on a mazy run and popped a pass inside to Thomas Toland. Thomas was unable to get his stroke in as the Ballymena defense crowded him out and he duly kicked the sliotar to the back of the Ballymena net. Ballymena pointed from a free before losing a man for a second yellow and Canice Mooney converted the resultant free, he added a further point following a pass out of defense to Chris Gallagher who hand-passed the sliotar off for him to strike it over the bar. Ballymena then launched a long, high ball into the square and it ended up in the net and when they added another point, from being in control we were a point in arrears. 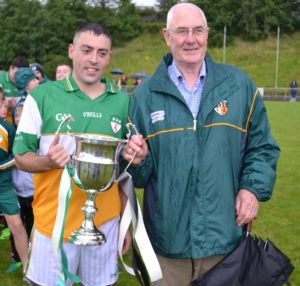 We then upped our performance and went through our best spell of the game, striking seven unanswered points, Canice Mooney (0-5) and Stephen McGivern (0-2). The highlights of the these scores was a point following a great solo run from Gearoid Cosgrove who fired a low ball into Sean McIlhatton who passed to Canice Mooney who finished the attack, he also struck a free straight between the sticks from his own half. This spell of scoring was enough to secure the win and the title. Ballymena put in an outstanding performance and pushed us all the way right to the last ten minutes of the game when we pulled away for the victory.

Next up in the Junior A championship is Glenravel on 6 August at Randelstown with a 3pm throw in .

Check out photos of the game by clicking here.