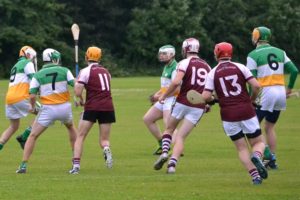 The senior hurlers winning streak came to an end when they went down by the minimum margin for the second time this season to Sean Treacys at Boucher Road. Despite playing against the breeze in the first half we started well with points from Colm McKee and Stephen McGivern. However, the Armagh boys responded with five unanswered points before Chris Gallagher pointed from an acute angle on the left wing. Again, the Armagh team responded and during a poor period for us we conceded 2-1 to leave us trailing by nine. A brace of points each for Stephen McGivern and Chris Gallagher reduced the deficit Â to five. Both teams then traded two points each with Canice Mooney and Chris Gallagher on target to leave us five in arrears at the break.

Sean Treacy’s opened the scoring in the second half with a point to extend their lead but during our best spell of the game we fought our way back into the match with points from Alan Rainey, Stephen McGivern and Canice Mooney before a Stephen McGivern goal levelled proceedings. Four Sean Treacy points, two from frees, put them back in control but Stephen McGivern’s second goal of the game reduced the lead to a single point with time ticking away. Sean Treacy’s then extended their lead with a pointed free. We pushed hard in the final minutes to get that elusive goal which would win us the game and while we had chances we failed to convert with Chris Gallagher’s point the final score of the game giving the Armagh men the win 2-14 to 2-13 in a highly competitive game.

Click here to check out photos of the game