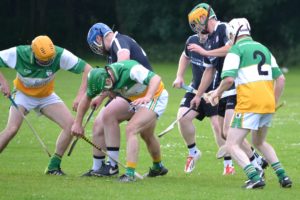 The senior hurlers continued their winning run with a comprehensive victory over Ardoyne at Boucher Road. The game started with both teams exchanging early points to tie the the game at three a a piece with our points all from Stephen McGivern Â (2 frees and a 65). However, from this point we took control and with scores from Colm McKee 0-3, Thomas Toland 0-1, Aaron Slane 1-1 and Stephen McGivern 0-2 Â we stretched into a commanding lead with Ardoyne’s only response a single point. Half time score 1-10 to 0-4.

Ardoyne opened the second half with two points but we replied with another point from Stephen McGivern and Aaron Slane’s second goal of the game. Another brace of points from Ardoyne then saw us go on another prolonged period of scoring with Stephen McGivern adding 1-2, Sean Prenter 0-1, Thomas Toland 1-0, Colm McKee 0-1 and Jordy O’Kane 0-1. Â With Ardoyne adding two further points during this period the final score saw us victorious 4-16 to 0-10.