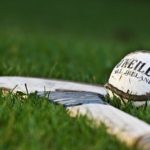 The senior hurlers were defeated by an excellent St Johnâ€™s team in their latest league outing. While the final score line would suggest that it was all one way it was anything but. We battled hard but the St Johnâ€™s team were just that bit more experienced and a split second sharper which enabled them to have the space and time to take their scores. However, we scored several fine points ourselves, notably one from Sean Prenter which started with a puck out from Sean Smyth to Thomas Maguire who hand-passed the sliotar to Anthony Rowntree who it turn drilled a pass to Prenter who dispatched it between the sticks, Canice Mooney struck a great long range point while Stephen McGivern pointed from a tight angle also from distance. One statistic which was displeasing was the 16 wides we struck but on a positive note we have to acknowledge that we created so many scoring opportunities against a quality side.