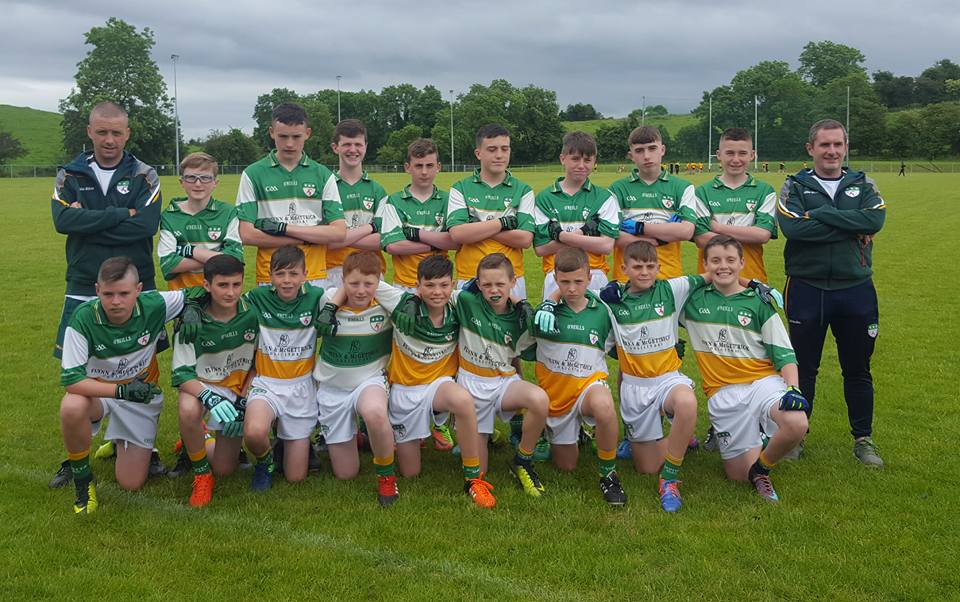 Our U14 football team’s FÃ©ile weekend began with a lunch in the club lounge, team photos and well wishes from parents and supporters before setting off for County Monaghan and our host club for the weekend Tyholland GFC

Our hosts had kindly laid on refreshments for both the team and supporters on arrival. After a quick â€˜getting to know you sessionâ€™ it was down to business of our opening game against Dunboyne (County Meath), coached by Meath’s All Ireland winning legendary manager Sean Boylan – and what a game it turned out to be! 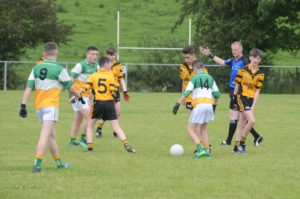 Some wayward shooting in the first half by us looked like it would come back to haunt us after our opponents managed to score 1-2 to no reply by halftime. It didnâ€™t get much better when a quick goal and point from Dunboyne in the first two minutes of the 2nd half saw us trailing by 9 points. But this group of lads have a winning mentality and slowly grew in to the game, taking our scores when the opportunities presented themselves. With the clock ticking down our lads pressed hard and wave after wave of attack saw the equalising point scored with seconds remaining. An absolute brilliant display of football coupled with a strong belief in their own ability saw them gain a well deserved point.

Our 2nd group game was against Drumhowan (County Monaghan). A clinical performance against a young but spirited team ensured a victory for us, much to the delight of the large number of supporters that had travelled down.

The kids then met their host families.

Saturday 24 June
The final game in our group was against our host club Tyholland. We took an early 6 point lead with some well taken scores before Tyholland staged a mini comeback, reducing our lead to a few points at half time. A mature second half performance saw us play to our strengths and stretch our lead to ensure another victory and with that we had topped our group and booked a quarter final place in the cup competition.

The quarter final match was scheduled to take place in Kingscourt stadium, therefore an hourâ€™s bus journey was in order to get to the stadium. We were drawn against Errigal Ciaran (County Tyrone). Our opponents started off the better team and secured a 5 point lead by halftime. Once again our boys showed their â€˜never-say-dieâ€™ attitude and attacked with great skill and determination from the start of the 2nd half. When the ball hit the back of Errigal Ciaran net mid-way through the 2nd half the large travelling support and the team thought that the comeback was on but to everyoneâ€™s disbelief the referee bizarrely over ruled the goal after consultation with the umpires! Disappointed but with even more determination our lads again rallied and with another seemingly fine goal not awarded by the officials, again to the disbelief of supporters and the team, the realisation that this was not to be our day dawned on us. The lads continued to attack and were rewarded with a few more scores but in the end our opponents held on and our boys were unfortunately out of the competition.

Disappointment for our lads but it has to be said that their efforts throughout the competition and indeed throughout the year have instilled a great pride within the club.

Well done lads you did yourselves, families, community and the club proud.Â Maith sibh.

It was then back to our wonderful hosts Tyholland GFC to join the locals, supporters, teams and families to watch Monaghan in the Ulster semi-final followed by presentations between the clubs, a juvenile disco / buffet and once again great hospitality and craic. With Tyholland U14 Girls team and Westmanstown Gaels U14 Girls team also in attendance we are pretty positive that our boys enjoyed the disco. 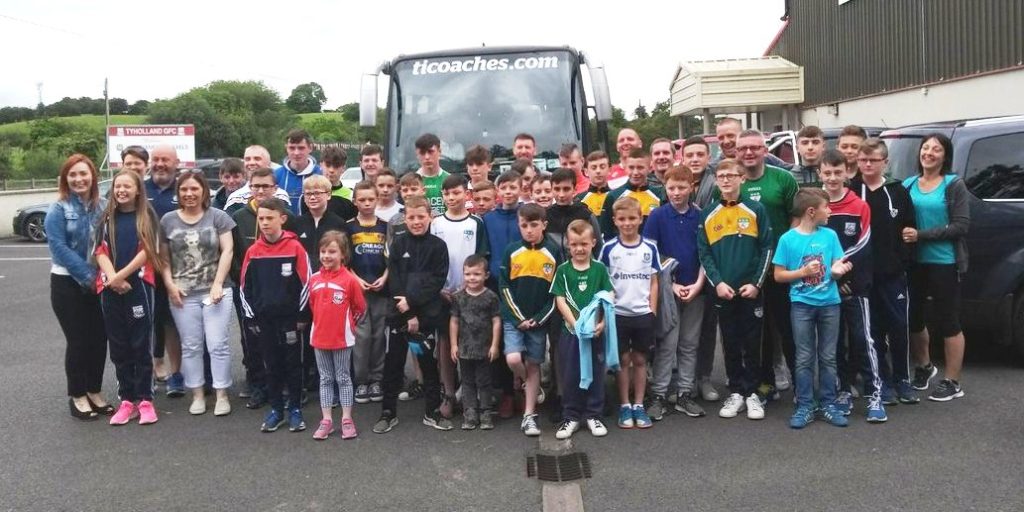 The team meet once again at Tyholland GFC to thank our host club and to say our final goodbyes to the friends we made over the weekend.

The kids had a brilliant weekend and we know that this experience will live in their memories for a very long time.

A huge thank you to our wonderful hosts Tyholland GFC and families that hosted our kids for the excellent hospitality shown to us. We hope that the friendships made over the weekend will continue for years to come. We look forward to hosting you in the future.

This entry was posted in Underage Football. Bookmark the permalink.