The fifties brought an array of trophies and titles to the Shack. The Junior hurlers defeated Wolf Tones (6-2 to 5-3) to win the ’50/51 South Antrim League title. They were also successful in the Frank Hamill Memorial Cup before defeating Wolf Tones again in October 1952 to take the South Antrim Junior Championship.

Earlier that year, the Junior Football League was captured and at Intermediate level, they strolled through the Corrigan Park Reconstruction tournament. The intermediate team went through the ’54 league undefeated and repeated this achievement in ’56/57. Remarkably, on this occasion, they again conceded only a single point in total from all their games, mirroring the 1948 team.

Through sterling work by John O’Toole and Jimmy McDaid, emphasis was centred on the youth and saw the emergence of a juvenile team, Davitt Og’s. The team competed in competitions during 1956. Although they didn’t win any silverware in their first years, many of this team were instrumental in the ’59/60 Junior Hurling League win. 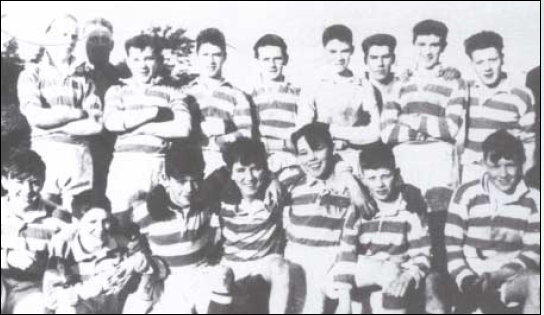 The ’60’s contained another landmark in the club’s history as the Golden Jubilee was celebrated in 1962. Gaelic games were shown live by RTE that year for the first time, two years after Down first brought “Sam” over the border with victory against Kerry. 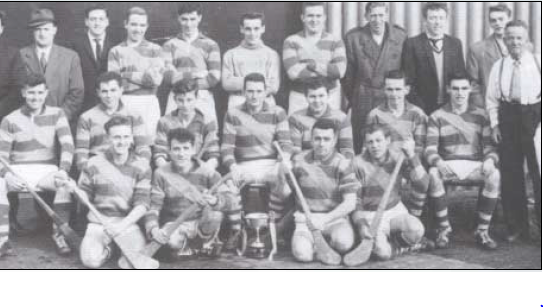 Many names now appeared on team sheets that are still synonymous with the club today; Brady, De Meulemester, O’Riordan, Shaw and Toner are but a few; instantly recognisable by even the youngest members today. The hurling team captured the South Antrim Division 3 title in 1960. They were again champions, a few years later in ’63 in the higher division. That year, the minor team also brought hurling honours, taking the Timmons Shield at the expense of St. Galls (4-7 to 3-4).

The footballers were also successful. They won the McKenna-McGinley Cup for five consecutive years, including ’62 and ’63. In ’63, they needed a replay to finally edge out Glenavy (0-8 to 1-3) for the All County Division 3 title. This helped to ease the disappointment of losing the Beringer Cup final to Dwyers. More county honours came in 1966 when the club was awarded the Junior Football Championship trophy by default. Having emerged as South Antrim champions, our final opponents, Moneyglass were serving a suspension and were prevented from contesting the game. The last silverware of that era came in ’67 having defeated St. Malachy’s to lift the Madden Cup. In ’68, the club competed in the Senior Football Championship for the first time since capturing the title in 1923.