In 1972, the football team lifted the South Antrim “A” Division. They also contested two other finals that year but lost both; the Martin Cup and the Junior Championship, the later needing a replay to separate us from St. Enda’s. The team reproduced their form the following year and pipped Portglenone for All County Division 3 glory. 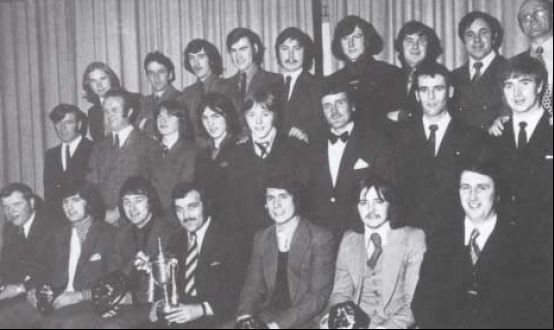 During the ’74/ 75 season, the De Meulemeesters’ inspirational hurling helped to secure the South Antrim Division 3 league. 1977 though was to be a memorable year. All County honours returned to the club as the footballers went through Division 3 unbeaten to lift the title again. Having suffered three previous final defeats, the name of Davitts was finally inscribed on the Beringer Cup. Favourites Eire Og were the opposition at Corrigan Park and a kick of the ball was all that we had to spare at the end, winning 3-7 to 3-6. Success also came in the Martin Cup with victory over Pearses in the final.

The end of the decade brought another All County title, this time in hurling. Rarsharkin were the opposition in the Junior Championship decider but with Paddy O’Neill contributing 3-3, the result was never in doubt in a comprehensive 6-7 to 2-3 win.

Many memorable successes came in the ’80’s as the club established themselves as a force within the County. Junior Football Championship success was achieved in 1980 with Jim McAuley prominent in the victory against Glenarm. Two years later, the Intermediate title and Beringer Cup were secured. The foundations laid down in earlier times had started to pay dividends. Titles at U-12, U-14 and minor level were won between ’80 – ’83. ’81 saw a couple of “firsts” in the club’s history. Eilish De Meulemeester became the first female member, while a team entered Division 4 of the handball league. They won that division the next year and by 1984, had gained promotion to Division 2.

The Association’s centenary year (1984) saw Cork defeat Offaly at Semple Stadium, Thurles to lift the Liam McCarthy Cup. Having been promoted to Division 2, the footballers only dropped four points in eighteen games to lift the trophy. They competed in Corrigan Park Open Week and defeated three Division 1 teams en route to success. The hurlers captured the All County Division 3 league.

85 footballers who competed in ACFL Div 1

Another milestone came in ’87 as the club reached its Diamond Anniversary. Many events were organised during the year, as another “first” was to come on the field. The South Antrim footballers lost the Martin Cup final while the Senior hurlers were unlucky against St. Galls in the Intermediate final. The disappointment of these defeats was forgotten as the Minor Football Championship was won at Casement Park.

Opponents, Lamh Dhearg, scored an early goal, which was their only score of the half. By half time, touchline advice from coaches Stephen Brady and Sean Prenter had the team two points ahead. They dominated the second half and the game was convincingly won 1-8 to 1-2. A dream realised, Captain, Stevie Toner, proudly received the Cup. 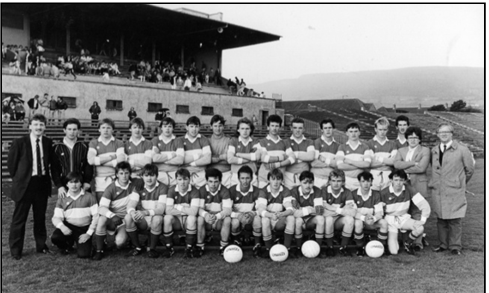 John Oâ€™Toole was elected Honorary President in 1988, while the successful 1987 minor winning championship team defeated Lamh Dearg, in the 1987 leagueÂ  play-off, to secure the double. The Senior footballers exited the SFC, going down to St Teresaâ€™s at Casement Park, 0-6 to 2-4, in a match that slipped away following a sending-off and controversial
penalty award.

The minor footballersâ€™ defence of their championship crown started with a win overÂ  Glenravel, at Twinbrook but they relinquished their title when bowing out to St Johns in the next round 3-2 to 3-6. The U14 footballers were blitz winners, while the U14 hurlers
won Division 2 of the league and the B section of the Feile Blitz, defeating St Galls, Ballycastle and the host team, Dunloy.

Success followed for the U12 hurlers, who won the U12 hurling blitz at Beechmount Leisure Centre on 21 October, defeating St Galls, St Endas, Gortnamona and Sarsfields. Earlier in the year, defeat to St Pauls in the U21 Football Championship final was a major disappointment, in what was acknowledged by everyone as a dismal performance, failing to show our true capabilities.

From a County perspective, the Antrim Senior Hurlers defied the odds and reached the
1989 All-Ireland Hurling Final. A fantastic goal from Armoyâ€™s Olcan McFetridge was
instrumental in the semi-final win over Offaly, setting up a huge challenge against
Tipperary in the final. The club allocation of 100 â€˜Hillâ€™ tickets and 40 stand tickets was
never going to be enough to cater for the huge interest and Eugene Gallagher had to
request 150 additional tickets to meet demand.

Over the weekend of 3rd September, members of all ages and friends flocked to Croke

in cars, minibuses and coaches. The waves of Saffron colours on the Hill was a sight that will long be remembered and despite losing 4-24 to 3-9, this was a unique experience as there would have been very few who would have been able to recall Antrimâ€™s only previous final appearance against Cork in 1943. Indeed, in a Dublin hotel on the eve of the match, our own Tom Jordan proudly sang â€˜The Green Glens of Antrimâ€™ for all the patrons and RTE cameras present, which was later broadcast on the evening news.

We continued to push forward in our quest to secure our own playing facilities but our pursuit of the sale of the Twinbrook pitch from the Housing Executive hit a snag, as the Lisburn Council were given first option to acquire the land.