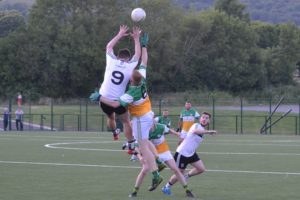 It was Ballymena who imposed themselves on the game from the outset and after 14 minutes led by 0-4 to no score. Gerard Burns registered our first point in the 15th minute but it should be noted that during this period we managed to kick 7 wides which would prove costly at the end of the game. Both teams exchanged points with Aaron Slane (0-2) from frees and when Chris Rafferty found the net the game was level. However, Ballymena had a good finish to the half kicking four points (2f) to go in at the break 1-3 to 0-10 in front.

Ballymena opened the scoring in the second half with a point but we responded with pointed frees from Chris Rafferty and Gerard Nugent. A Ballymena point followed by a goal firmly put them in the ascendancy. At this stage we tried to up the tempo of the game and while we added points from Nathan Maginn, Gerard Nugent, Daniel Largey and Jay Close, Ballymena matched our scores to take the win 1-15 to 1-10. Again a feature of this half was the number of wides that we kicked and definitely on the night we didn’t have our shooting boots on.

This entry was posted in General Information. Bookmark the permalink.
This site uses cookies More info