Our U14 hurling teams eagerly anticipated FÃ©ile weekend began with a hearty breakfast with parents and supporters in the club lounge. After the obligatory team photos and well wishes the team set off to Ferns St Aidan’s (County Wexford) our hosts for the weekend.

Glorious weather greeted us as we arrived at Ferns St Aidanâ€™s GAC and it was straight down to getting the kids stretched and loosened up, after their long journey, in preparation for upcoming games.

Our two scheduled group games on Friday saw us play Kilrush/Askamore (Co. Wexford) and Bredagh (Co. Down). Our large travelling support, with club flags in tow, roared on our lads but unfortunately both games saw our opponents collect the points. Our boys hurled with great skill and commitment and as always did themselves and the club proud with their efforts.
It was then time for the kids to meet their host families and with that our club supporters retired to our dwellings for tea and cucumber sandwiches (cough)! 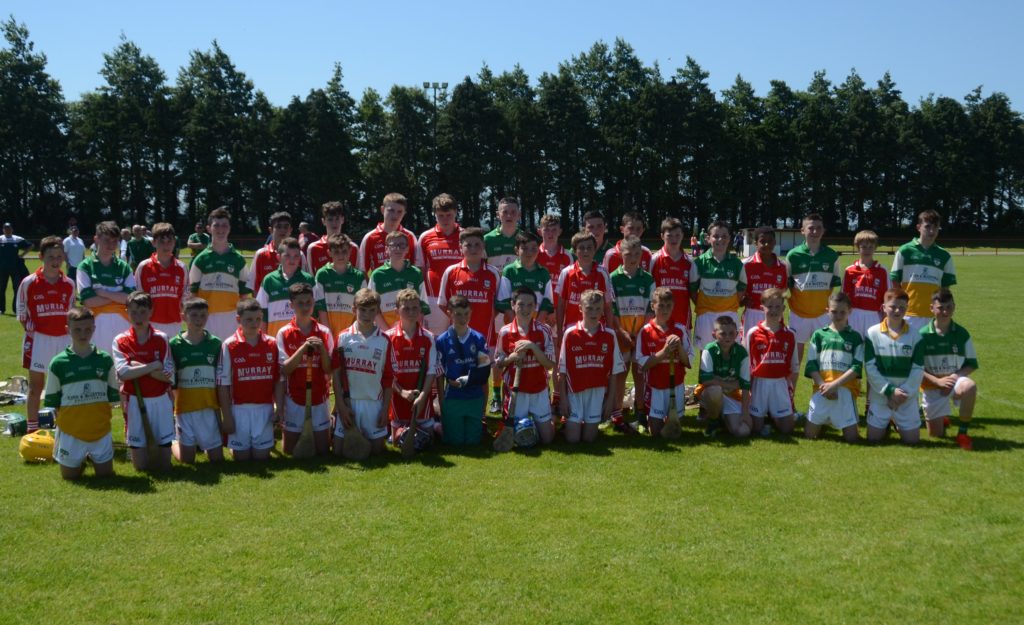 The final game in our group was against our host club Ferns St Aidan’s, and what a game it turned out to be. In blistering heat Davitts took an early 4 point lead but Ferns produced a fine performance to edge one point in front at the break. The second half saw quality hurling from both teams, played in a committed but fair manner. We were trailing by 4 points with a few minutes left on the clock but our lads rallied, with the vocal backing of supporters, to equalise with seconds to go on the clock. The manner in which our lads battled right to the final whistle to gain a well-earned draw against our hosts filled us all with great pride.

A quarter final place in the Division 4 shield against Graigue Ballycallan (Co. Kilkenny) was our next game. Once again our lads produced some great hurling but unfortunately a place in the semi-final was a step to far for us with our opponents progressing.

Disappointment for our lads but after a quick talk from our chairman, praising them for their efforts, as well as the travelling support letting them know how proud we were of them the smiles soon returned.

A parade for host club Ferns (Hurling and Camogie) and visiting clubs Edendork, Tyrone (Camogie) and ourselves was organised for later that evening. Starting off from the village centre to Ferns Gaelic grounds, and lead by a piper, all the teams were in fine spirits with songs and chants (mostly lead by Big Jim and Gavin!) greeting the welcoming locals as we headed to the BBQ and presentations.

The team meet once again at Ferns St Aidanâ€™s to wish our host club all the best as they set off to play their semi-final and to say our final goodbyes and thank yous to the friends we made over the short but action packed weekend.

Overall, the kids had a wonderful time and we know that this experience will live in their memories for years to come.

A huge thank you to our wonderful hosts Ferns St Aidanâ€™s and families that hosted our kids for the excellent hospitality shown to us. We hope that the friendships made over the weekend will continue for years to come. We look forward to hosting you in the future.

Photos from the weekend can be accessed by clicking here.

This entry was posted in Underage Hurling. Bookmark the permalink.
This site uses cookies More info